NUMBER 101 AND THE MAKING OF A VIDEO 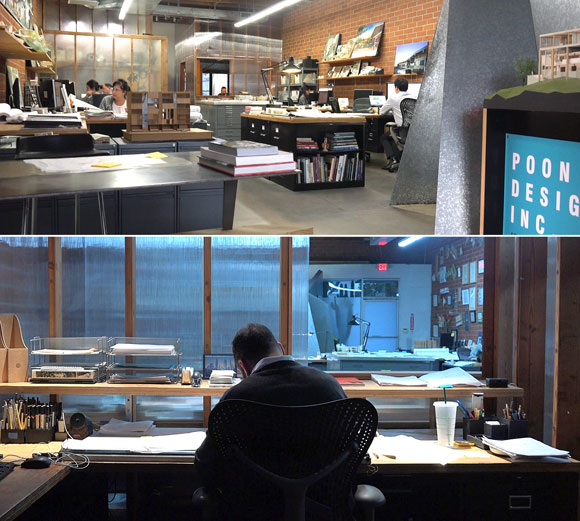 Within the studio of Poon Design Inc.: raw, industrial, collaborative and exploratory.

For myself, I applaud. Today I am publishing my 101st essay on this platform! In traditional terms, this effort would constitute a 500-page book, not even counting photos. For this blog (web-log: for those who don’t know), I have avoided writing silly tweets, mere blurbs and convenient commentary. Instead, I have sought to author articles of substantial thought—researched, illustrated and well composed. To accompany this 101st article, a video was created on Poon Design Inc., by videographer, Grant Bozigian.

I invite you to watch our video here .

As we started this project, I studied videos about architecture companies. Some too long, some too short, some weirdly paced, and some with no substance at all. Most of the corporate marketing videos had a talking head in a suit, usually an old white guy talking tediously about being “on budget and on schedule.” Is this content worthy of a video?

One video from a prestigious design company used a single gimmick: staff members talking about a certain material they like, such as stone or metal. Interesting as an idea, yes—but over and over again? I endlessly watched one anonymous staffer after another approaching the camera with a big piece of glass or tile. It’s a one-trick pony.

I was unfortunate to run across a video that didn’t show any images of the architecture, which I assume is what most audiences want to see. Instead, this architect presented the company’s logo in various animated forms. It was absurd, and I wondered: Who cares?

I found the poor videos shocking, because a video is very architectural—in that it is spatial, experiential, and a journey through time. Shouldn’t an architect be able to conceive of a creative video, just as she would design a creative building?

With the making of our video, I sought to tell a story, as well as show images of the work of Poon Design. The video is in three parts: a little about me, who we are as a studio and what we do, and finally, our interest in the creative process and storytelling. I hope you enjoy it. Our videographer also composed the music, except of course for the beginning which I thank J.S. Bach for his Praeludium from Partita No. 1 in B flat major, BMV 825.

Look for some wonderful details. Avoiding the cliché, often-ridiculed-Ken-Burns-panning of photographs, we animated some still images with a subtle motion between the foreground and background. The first project starts with a fortunate footage catching the Goodyear blimp in the sky. Complementing this, an airplane soars through a computer rendering later in the video. My company video ends with the same project from the start, but now at dusk, as the design goes to sleep.

We show not just the pretty pictures of our designs, but also the creative mess behind it: our disorganized but sincere desks, dusty cardboard models, color pencils in entropy, sketches of good and bad ideas, the typical rolls and rolls of drawings, and an artist’s palette of acrylic paints.