A MIGHTY CITY FREEZES OVER, PART 2 OF 4 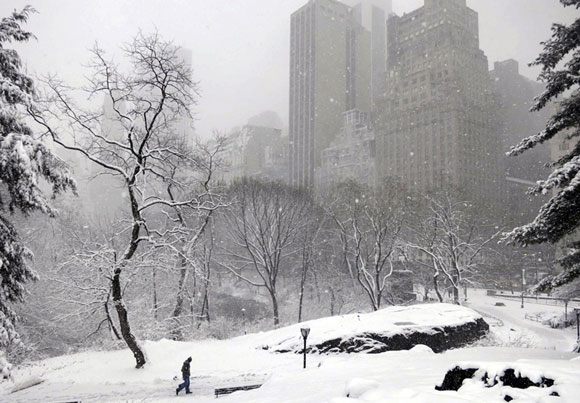 Not long after Manhattan’s ochre and sepia autumn, gentle blowing breezes become fiercely gusting winds. Winter’s gale wants so perversely to whip the flesh off our bones. It seems as if the city might blow away. Merciless, it was my first New York December. Circa 1986, a-city-freezing-over.

Snow appears shortly, a freeze paralyzing a monumental city. Sharp icy spirits bite my body. My skin, a brittle armor, feels weak and fragile—like the first thin layer of ice over a vast lake. As wind chills my stone dry face, snow starts to gather along my eyelids. The gust of a snowstorm. This frigid onslaught.

Days pass and snow continues to fall. Falling from nowhere in particular, trying so damn hard to cover the Earth, the snow stays afloat in circles of windy nonsense.

All is white. A severe week of this albinism weakens the city, strips the land not just of pigmentation, but of courage as well. Everyone hides inside. Different than a yellow and orange fall, a new color scheme is upon me. This palette is of white nothingness, aggressive in its modesty.

Around the city, I see colorless loosely-formed shapes, rounded soft configurations, like a world made child-safe. Everything is homogenous: an opaque white Jell-O poured into a city-scale mold.

At night, snow reflects the downward light from street lamps back upward. Peculiar because light is rarely thought of as illuminating up from the ground. Imagine walking on light. Imagine no shadows. Every piece of this mighty city has been ungrounded.

Any evidence that might suggest a breathing city, vanishes under a deep blanket of white silence. The town freezes to a death-like passivity. The great city lays low in forced hibernation. The quiet death I witness is poignant. The white repose is gentle as it is also frightening. A metropolis brought to its begging knees, is immobilized into delicate foreboding beauty. When a community sleeps a sleep as deep as this, the apparent finality is conclusive enough to rival mortality itself.

As the snow finally stops falling, as ice softens, the inhabitants come slowly out of their hiding places to once again stomp as they will, eager to take back their environment. The city turns an ugly scene of brown mud and slush. The colorless beauty I saw only moments ago is now trampled on by belligerent life. This vigor of street activity pecks away at winter’s lush blanket, leaving it a dirty muddy mess. I prefer the elegance of a resting death to this combative unattractive life.