THE MEEK AND THE MIGHTY 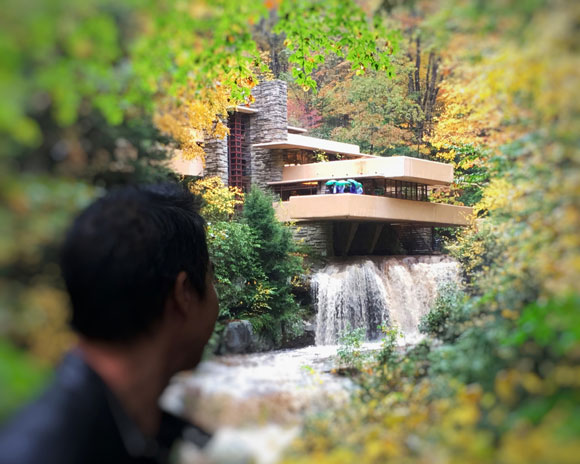 I recently had the joy of visiting two homes designed by Frank Lloyd Wright: a modest design and his most ambitious.

The cozy Pope-Leighey House in Virginia totals a mere 1,200 square feet. In stark contrast, the visionary estate known as Fallingwater in Pennsylvania has a 2,900 square foot residence, 2,500 square feet of terraces, and a guest house of 1,700 square feet. Surrounded by 5,000 acres of the Bear Run Nature Reserve, this house cantilevers over a waterfall.

When historians speak of Wright’s homes as being intimately scaled, was this because Wright had a unique interpretation of domestic life, or was it because he was petite? Only 5′ – 7”.

For both houses, Wright utilizes two of his most classic moves. The first connects the interiors to the exterior surroundings, suggesting that a house might be a home with no walls—that only Mother Nature limits the boundaries of the structure.

Another very Wrightian theme: compression and release. Small spaces are manipulated to be even smaller, so that the large spaces feel larger. The transition is no mere door threshold, but a cramped, dark hallway theatrically stepping into a tall room with expansive glass. Through spatial contrast, the architect bestows drama.

Unless you don’t have the Internet or have been trapped under a fallen rock, Fallingwater is universally agreed upon as one of the best homes in the world. The design has offered over 4.5 million tourists a glimpse into genius. Here, I only have two comments to make.

One, Wright explored a crazy idea: a shower out of cork. Really? Sure, it creates a comfy environment, but why use a porous material that will be constantly pounded on by water. What’s next: a toilet made of a sponge?

Two, the beauty of noise. We have all seen thousands of pictures of Fallingwater. What is missing in even the best of photographs is the sound of the waterfall. The beautiful score of racing waters surrounds the estate, reverberating through the walls, reminding the visitors that they are in a house not just called Fallingwater, but literally built over a waterfall.

In both homes, the kitchen, bathrooms and bedrooms do not impress. But then again, during this period, they weren’t supposed to.

Current California homebuyers obsess over enormous kitchens with 20-foot long islands and commercial-quality appliances, spa bathrooms with luxurious two-person water-jetted showers, and massive bedroom suites with sitting rooms and an espresso/smoothie bar. Such American dreams surpass the excessive and the ridiculous, when seeing how comfortable one can live at the Pope-Leighey House.

This precious home is small, but does not suffer from being miniature. Quite the opposite, the taut composition feels grand and generous, never trivial. When critics say a design is a jewel-of-a-project, it is not in reference to glass and reflectivity. Rather, it is a design of brilliance and clarity. Such is Pope-Leighey, and “Good things comes in small packages.”

This nicely edited creation wastes no energy. All the aspects of a perfect home present themselves in rigorous form. With Fallingwater, I wonder what I would do with these enormous terraces that seem to be sized for a party of 500. Pope-Leighey squanders not even a square inch. I felt more at home in this living room, than the one in Fallingwater sprawling at ten times the size.

Often called one of architecture’s geniuses, Frank Lloyd Wright demonstrates virtuosity when either flexing his muscles and being unshackled, or relaxing and offering restraint and modesty.