LIFE AND DEATH OF ARCHITECTURE 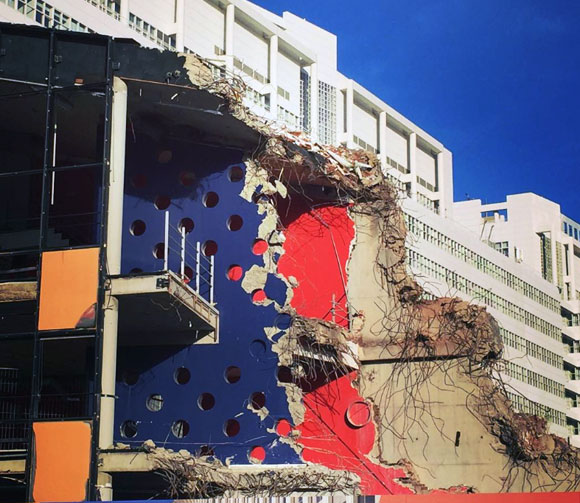 2016 demolition of the Netherlands Dance Theater, The Hague, by Rem Koolhaas, OMA (photo by kojiri.jp)

One of my favorite projects was recently demolished. From the team at Poon Design, our Vosges Haut-Chocolat in Beverly Hills is no more.

A month later, another work of ours demolished: Saffron, an Indian restaurant. Years ago, 8 Fish, our design for a sushi joint also met the demise of a bulldozer.

Of two hundred completed projects by Poon Design, only these three have confronted this fate of a demolition crew. That these deaths are retail and restaurants, and knowing how often such businesses fail, I do not fret over the casualties within my portfolio. I am however amazed by my reactions: bereavement, relief and optimism.

At a collection of industrial buildings in the modish Arts District of downtown Los Angeles, our client The Container Yard invites street artists to paint—world celebrated alongside up-and-comers. With hundreds of building walls, inside and out, offering blank canvases 50 feet wide, each painter is granted autonomy to create. At this shared community, no desperate grab for territory or pronouncements of ego exist.

Inevitably, a mural by one artist is painted over by another artist, without hesitation or dispute. A magnificent work of brush and spray paint techniques, weeks or months in the making, may present itself for only a few days before a new artist wipes out the preceding work.

Other than temporary structures like an expo pavilion, a pop-up store, or a stage set, architects don’t typically design with casual ambitions and in a transitory setting like The Container Yard. When architects create, we expect our work to stand tall for decades. My ego hopes that not only will my work be accepted, but fingers crossed, also embraced for a generations.

When a project of mine must be torn down to be superseded by another architect’s vision, rejection and relief arise. In some acclaimed projects such as with Vosges, the demolition delivers disappointment that my work did not endure longer for more visitors to enjoy. But for 8 Fish, a less satisfying work of mine, I was ready to make way for another architect with better ideas.

One of my favorite architects and my professor,  Rem Koolhaas, confronts his own emotions of defeat regarding the recent death of his first major project, the much praised Netherlands Dance Theater completed in 1987. Koolhaas confesses shock that one of his most significant designs was demolished with little fanfare or concern, “That element of surprise has in a way preempted a feeling of tragedy or loss.”

My position on the eradication of my hard work is that the soul of civilization is “progressive.” As the Emerson quote asserts, “. . . it never quite repeats itself, but in every act attempts the production of a new and fairer whole.”

Though I wish that my creative work can remain permanently for people to experience forever, I accept that what I contribute to the built environment, whether a house, school or church, is but one small artifact in the immense arc known as Progress. And such are the Best Demo’d Plans of Mice and Men.