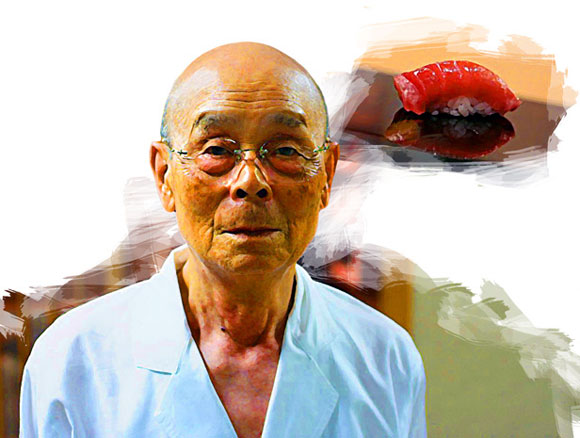 Artwork of the most famous sushi chef in the world, Jiro Ono at Sukiyabashi Jiro, Tokyo; image adapted from the documentary film, Jiro Dreams of Sushi, 2011 (art from fortgordon.com)

(As I have been hosting book signings/receptions for my new book, Sticks & Stones | Steel & Glass, this story from my youth stands out both brightly, dimly and humorously. Also, don’t miss my lecture and book signing at the nationally-attended Modernism Week, February 23, 2018)

This wasn’t funny at the time, but such a speed bump on my career path was a building block in my character—at least I hope so.

I was dreaming of sushi. More accurately, I was tired and disoriented, as life loves to do to those who choose to participate.

As a young Manhattan architect in the late 1980’s, thrilling yes, but it was late and I was hungry.

All I could think of was to pass some time at my favorite bookstore. (Yes, books. As I said, it was the 80’s.) Urban Center Books, a store focused exclusively on design was the magnet retailer for all architects. This shop also launched many authors, organizing media events, interviews and exhibits.

I figured I would just pop in, peruse a few books, and then leave to take home some sushi from the local market.

The setting. Urban Center Books resided in the old Villard Houses, an 1880 residence on Madison Avenue designed by McKim, Mead & White. In 1968, the city designated this Italian Renaissance mansion a landmark.

But in 1981, the Helmsley Palace Hotel opened a 55-floor skyscraper next to and on top of the Villard. An aggressive black glass tower squatted on the elegant mansion.

Though the four-story Villard wings remained, it was as if the Sphinx’s head had been replaced by a massive 600-foot tall computer monitor, but with the ancient legs left to be.

As I turned into the courtyard between the two landmark wings, light and sound poured out of the Urban Center doors. A book reception? There would be food. I had no invite, I was young and stupid, and only twenty-three. To say I crashed the party would be too dramatic. I merely slipped in to get myself a little dinner.

I proceeded unnoticed around the room, glass of wine in hand, feasting on finger food. I had, oh yes, spotted some sushi at the end of a long buffet table, when I pulled right up into the face of an architecture professor who I did not like, and who did not like me: Lars Lerup.

I was certain he did not remember exactly who I was. After all, I would’ve been just another young face in his class subject to the intellectual abuse he felt he had the right to parcel out. All I could muster up to ask was, “What brings you to New York, professor?”

He stomped off with no response.

‘Stealing’ a few more pieces of sushi, I ran into Jeffrey Inaba, a former schoolmate. I expressed how it was such a strange coincidence that our West Coast teacher was present here on the East Coast.

Jeffrey dramatically pointed to the main table. Aghast, I now saw that the Urban Center Books was hosting a private party in honor of Professor Lars Lerup and the launch of his new book, Planned Assaults.

Not only did I crash a party, but I crashed Lerup’s party, an exclusive event for a prestigious if insufferable architect. AND, I had asked to his face why he was in town, while munching on his sushi.

As I said, I was only twenty-three. And hungry.

“WIPE THAT SMIRK OFF YOUR FACE” 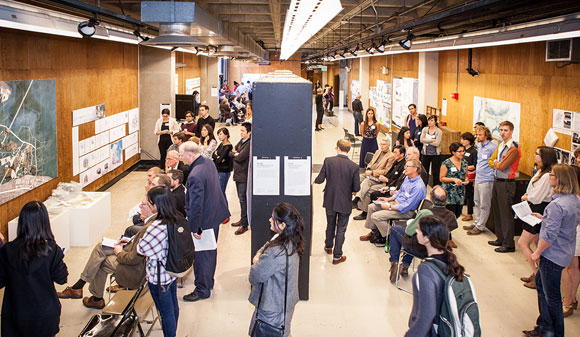 More than an academic exercise for a mere letter grade, The American Institute of Architects co-sponsored our class, structuring it as a design competition. The winners’ drawings and models would become a public architectural exhibition.

Carefully balanced on two feet, I stood at the front of the class. 40 people in the audience and counting: classmates, faculty, professionals, and members of the AIA. Dauntlessly, I presented my heroic and sardonic church: a boxy concrete temple imprisoned in a giant steel frame, seven stories tall. My artistic composition equated religion to a sanctuary within a constricting cage.

I knew my idea was good. For my drawings, I created a technique that preceded computer generated images. I employed diamond tipped technical pens filled with black Indian ink, drawing on large translucent plastic sheets. On the backside, I applied adhesive color films, each layer surgically cut by hand with an X-Acto No. 11 razor blade, known for its similarity in shape to an actual surgeon’s knife.

Concluding my bold presentation and audacious metaphors, I beamed a self-assured smile.

My professor, Lars Lerup, was already revved up. He lambasted my design, hurling bombastic criticism at my “sad attempt to understand the meaning of architecture and the sublime.” The professor’s assault was both self-servingly theatrical and pretentiously dogmatic. For twenty minutes, not stopping for a single breath, Lerup was clearly on the offensive against a foolish student. As Lerup’s back-up dancers, the faculty seated with my professor propped him up with their complete silence.

Tired from the past sleepless nights, I didn’t mind too much. Perhaps I knew my work was good. Or maybe I just didn’t care because I was soon to graduate.

My professor glared at me for any kind of reaction, any kind of acknowledgement that I was learning at his world class institution. Not responding, I stood there smiling politely. Carefully balanced on two feet.

He would not, could not stand for this, as his shrieking reached an all-time high in melodrama, and an all-time low in appropriateness from an educator towards his student.

The professor shouted, “Anthony, why are you smiling?! I want you to WIPE THAT SMIRK OFF YOUR FACE! Or I will do it for you!!”

Continuing this tirade for a few more minutes, Lerup eventually lost steam against an opponent that was not interested in being his opponent. And then, it was over. I jigged and hopped out of Wurster Hall.

OUTRO: I ran into Lars Lerup in New York a year later, and that my friends was an even more outrageous story. More another day.