WHO THE HECK WAS THIS GUY? 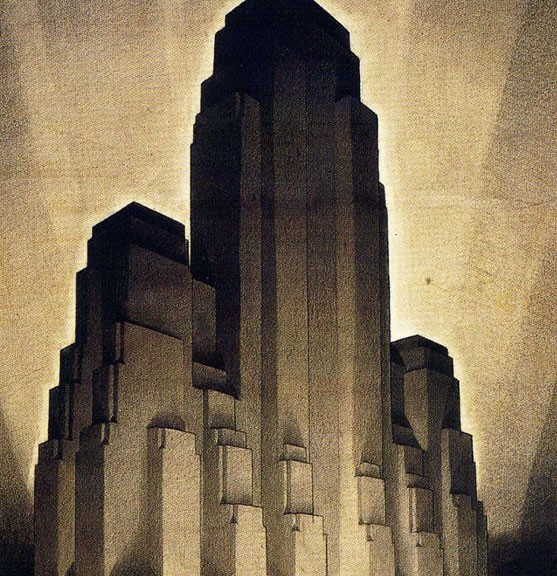 So I had this entry-level stint at a corporate Manhattan firm, in one of those shiny Midtown skyscrapers. Cramped in cubicles more suited for a telemarketing company than an architectural studio, we all mindlessly drafted and read code manuals and technical standards.

But in the far corner of our over-crowded floor with a spacious loft-like area was This Guy.

He stood alone. In contrast to our low acoustic tile ceiling and blue-ish fluorescent lighting—large windows with city views and an artsy open structure high ceiling surrounded This Guy. Whether from the natural light or a personal aura, This Guy actually glowed.

Of course. This Guy dressed from head to toe in all black, from turtleneck (gimme a break) to loafers (it was the Eighties). He had no desk, no office chair, not even a drafting table. Poised at a giant easel, This Guy just stood heroically, drawing with black, grey and white pastels on large sheets of parchment paper.

Arms waving emphatically, he drew silhouettes of office towers, one after another. He dreamt up fantastical ambitious highrises. This Guy worked with great intensity and from what it seemed, for an audience—as he dramatically worked a shadow with his palm, then added a crisp white profile with the pastel powder on his thumb. This Guy would then step back several paces from his easel to appreciate his creations.

He was young, maybe mid-30’s, but the entire office treated him as a shaman or demigod. Several dozen co-workers patiently watched This Guy finish his pastel designs. When he was done, we mindless workers scurried back to our desks. In contrast to the spectacular daily work of This Guy, our sad and unartistic existence comprised working through monotonous details of some boring design.

One day, I had to ask. I questioned my manager, “Who is This Guy?” Who is this deity the company reveres?

The manager responded with humility and reverence, “He is our Designer.” It was a kind of answer, seductive and mysterious. But also stupid.

I looked at This Guy’s pretentious work more closely and thought that most of my college classmates, and more importantly, that I could produce such stimulating ideas, and do so in pastels, or if needed, air brush, colored pencils, acrylics, or any medium required to appear amazing.

Perhaps I was naïve or competitive, but I saw nothing special in This Guy’s design work. I could not find myself willing to worship the divine visions that he bestowed upon us. As sometimes said of Warhol, his greatest act of artistic genius was convincing everyone that he was an artistic genius.

I didn’t stay long at that company. Only a few months.

If I were to work for a Big Deal architectural designer, then he better be a Real Deal. If not, then I should work for myself. And hopefully be a Big Deal myself, and not just That Guy.