OCMA REVIEW: THE BEAUTY OF EXCESS 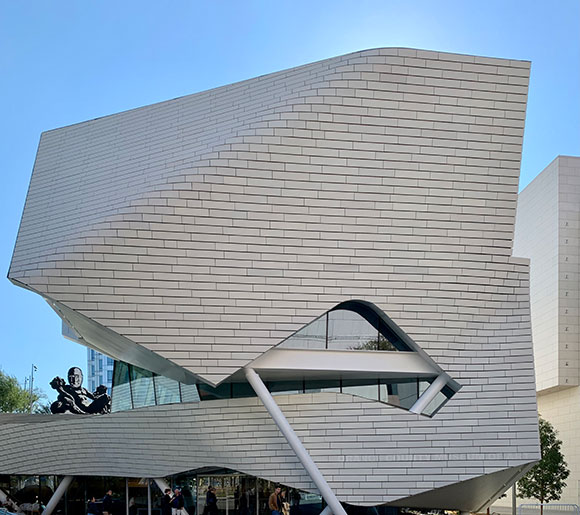 Upon visiting the recently completed Orange County Museum of Art, I thought of Christina Aguilera or Patti LaBelle. Maybe Whitney Houston too. All three singers engage in vocal acrobatics, excessive riffs of attention-grabbing notes in virtuoso succession. So too with the new museum designed by Culver City-based Morphosis.

Pritzker Prize winner Thom Mayne, founding architect of Morphosis, designed the $93 million, 53,000-square-foot museum, also known as OCMA—in the long line of museums of four letters, e.g. MOCA, MOMA, NMNS, CMOA, and so on. At OCMA, 25,000 square feet is dedicated to displaying the museum’s 4,500 works from the 20th and 21st centuries.

Mayne states that he created “a gradient of architectural intensity, from complex forms at the museum’s entry to rectilinear and flexible forms within the galleries.”

Approaching from the street, the low profile rectilinear building presents an understated curbside appeal. But entering the plaza and greeted by Richard Serra’s 65-foot-tall sculpture of his signature weathered steel, the architect’s ambition for “architectural intensity” rings true.

Sweeping, tilting, and undulating forms, wrapped in individually-custom white terra cotta panels, rise up to the sky—not unlike a composition from Frank Gehry’s repertory. OCMA’s sinuous and muscular character on the outside continues within. A central space twists and warps three-stories high, punctuated by glass and steel bridges crossing each other haphazardly. The building represents fantastical gestures afforded by digital technology. Such advance software results in the Construction Documents (once called blueprints) that instruct the construction team how to turn such heroic shapes from curved lines on paper to reality.

This contemporary building shines brightly as both an icon and a rebel within the unabashedly conservative region of Orange County. Of such exciting building forms and interior spaces that counter the idiom, “less is more,” one has to ponder if such shapes and surfaces are warranted in the first place. Besides the thrill I felt touring and confronting such a sculpturally innovative building, are all these design moves necessary? Was the money well spent? How many brain cells were damaged in figuring out how to defy gravity?

I enjoy the projects of Morphosis, these designs of virtuosity and flair. Save a few restrained structures like the Taubman Complex at Lawrence Technological University, Morphosis’ body of work challenges architecture as art, graphic representation, and construction methods—the artistic soul as well—and employs the keenest minds and highest tools of technology. The results are no doubt incredible and stunning.

But one has to question, isn’t architecture more than making sexy forms? In a recent symposium at Los Angeles’ Colburn School, Mayne attempted to (unsuccessfully) deflect questions about his work being mostly about composition and aesthetics. Today, architecture is more than the shape and form of a building, more than how it looks. At its best, architecture involves sustainability/carbon neutrality, community engagement, social equity/diversity, resilience, biophilia, affordability and access, adaptive reuse, philanthropy, and ethical labor practices.

Regardless, I am a fan of the work at Morphosis, and this brings me back to the aforementioned singers. Sure, they sing unnecessary notes. Sure, it sounds gratuitous and self-serving. Much of the vocal lines, often called “runs,” are excessive, merely indulgent passages that show off one’s fancy skills. But admittedly, I like it. I find it exhilarating even intoxicating to be transported beyond what a standard performer’s voice can do. So too with the architecture of Morphosis.