THE ARCH PODCAST, FORM MAGAZINE, 3 OF 3: JAZZ, MISTAKES AND BEAUTY

(Note on COVID-19: As I compile thoughts for a timely essay on the pandemic, not much of my writing was adding to the sentiments already out there, i.e., what can architects do, what is the future of cities, how to design public spaces, what will healthcare architecture be, etc.? Rather than be repetitive with many current writers, I am publishing this interview which was previously prepared but not yet released. Stay safe everyone.)

I invite you to listen to The Arch, a podcast of Form magazine. Previous excerpts are here and here.

Carol Bishop: Can you name any of the projects from the past or any projects that are around that you just said, “Wow, I think this is a great one and I think I’ll try something to meet that same criteria”?

Anthony Poon: There are a number of architects that inspire us, but for me, my architecture is not inspired by necessarily other buildings or architects’ work. I find my inspiration in my other interests, music for example or writing.

A building design can be inspired by a poem. It can be inspired by beautiful footage from a movie. I’m fascinated by, for example, the music of Thelonious Monk, a jazz pianist whose work is extremely individual and unique. He plays chords and harmonies that are, in the classical sense, considered discordant and off-beat. Some would even say it is kind of grotesque. But at the same time, the music is considered beautiful. What is it that he does that seems to be incorrect but somehow still so beautiful? It’s that kind of thinking that inspires what we do in architecture.

In that sense, architecture is for those who are patient and possess perseverance. But to bring it back to jazz, my fascination is this. Jazz ,as you know, is something that is spontaneous. It’s fast. It’s improvised. It’s played impromptu. Three or four jazz musicians can gather in a studio and sit at their instruments, and just start playing. They can choose a key, they can choose a theme, just something they can think about collaboratively. They wink and they just hit a beat. And all of a sudden, there’s music. That kind of spontaneous artistic process inspires me. And it makes me think: What can we do in architecture, in that creative process, to make it a little more organic, a little more fluid and loose?

Anthony: Yes, of course, that can happen. I think one of the curses of being an architect— and most of my architect colleagues would probably agree and maybe artists, writers and musicians as well—is that the work is never done. The work is always in progress. We always think that we can do better. When a building is designed and finally constructed, we may have rave reviews, many thanks, and letters of recommendation and handshakes, but we might be walking into that finished space thinking: Oh, I wish we had raised that ceiling six more inches; it would have done so much more for the volume of the space and the indoor/outdoor connection.

I know of colleagues who have published books and they’ve done well. They’ve won awards, they’ve won critical acclaim, and they’re thinking: Oh, that just wasn’t right. I really should have written a more elaborate ending. I should have added that extra character.

Maybe it’s a curse. Maybe it’s just the burden of the creative spirit—that even though a building is done, even though a book gets published, or a piece of music is performed—that the creative process is a continuing journey. In our minds, just because that building has finally cut the red ribbon for opening day, that design is not done.

Carol: You brought up the concept of beauty and, of course, there are so many definitions of what beauty is, so many ideas of what beauty can be. You can say to somebody, “Oh, this is beautiful”, and they’re just looking at eye candy, or you could say, “Well, the Greeks used mathematical intervals.” What is your idea of beauty?

Anthony: There are several definitions of beauty. There are, as you mentioned, the kind of mathematical ideas of beauty that play out both in music and in architecture. There are scientific relationships between notes of music that have been determined to sound harmonious. There are scientific studies on the rhythm of music, meters, the key of music, and the colors that have been proven to be beautiful. There are some musicians who say beauty isn’t necessarily a goal in music. Mozart had always claimed that music should be beautiful, but there are other composers, say Beethoven, that say: Yes, it could be beautiful, but it doesn’t have to be. It can also be aggressive. It can also be heroic or bombastic or ceremonial. It doesn’t always have to be of all the ideas one thinks of being pretty and lyrical.

Take architecture. There are also scientific ideas of what feels right using studies of proportions. The Greeks and Romans studied those and decided there are certain dimensions and proportioning systems that feel right. There are arguments of buildings or even aspects of the building, like a column, that if it represents man or the human figure, that it will relate more to a person and therefore feel more beautiful. Take a column. A classical column has three parts: the base, the shaft, and the capital. That is supposed to relate to the human figure, the feet, the body, and the head. In that way, there’s the belief that that will give you beauty in the end.

Setting aside the scientific approach, I do believe there are things that are inherently beautiful. I think people would agree that a sunset is beautiful. Or, I’ve never heard anyone go to the Grand Canyon and say: Yeah, this is not beautiful. This is ugly.

I think there are true aspects of beauty. I think the challenge is, how do we make beauty? How do we craft beauty? In our work, we believe that beauty comes from seeing the craft of the hand. There are many ways to put a building together, that can be machine made, can be digitally fabricated. But where we can add components that display the hand, where you can see the craft of the maker—I think that inherently makes it more beautiful.

Another aspect that’s important to our work is patina,  the idea of weathering and aging. We believe that that patina also adds beauty. For example, everyone has their favorite pair of jeans or maybe leather jacket, and those items have been worn over time. As they look more distressed, they look more beautiful. But this idea of patina doesn’t apply to a car. No one wants to drive around in a beat-up car.

With architecture I think there is an in between. We’ve designed a project, a Buddhist temple in Natural Bridge, Virginia, in which it was designed to age, in which the wood timbers are meant to weather over time and show the wear. The copper roof, as most people know, will be a metal that ages, that starts bright copper, orange color, goes to a dark penny patina, and eventually goes a beautiful green. This idea of patina expresses the weathering of a building, that a building ages gracefully, as we do, and thereby becomes more beautiful.

We don’t want someone to say: Oh, these timbers of this Buddhist temple are now unattractive. Let’s sand them again, let’s stain them again. Let’s paint them. We don’t want someone to say: How come that copper roof isn’t shiny orange anymore? We want to design it in such a way that people will look at our work each day, see it change over time, compare that to their own life as they evolve, and say: This is what we see as beauty. 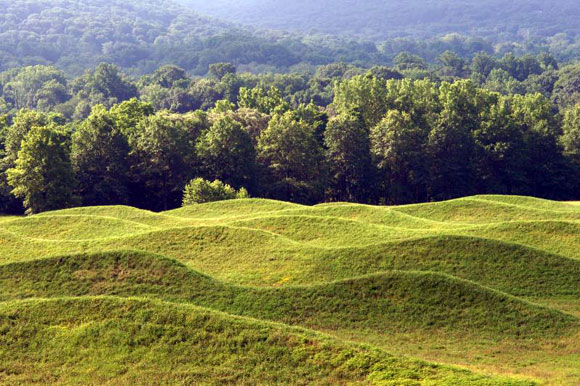