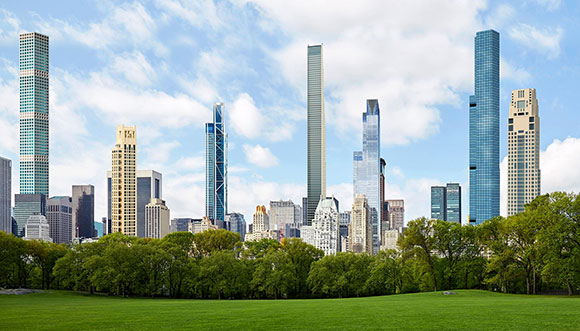 (This essay comprises excerpts from my presentation, The Creative Process and The Ego, on February 18th at Modernism Week 2022, Palm Springs, California. An additional excerpt on ego and arrogance is here.)

The architect’s responsibility to society goes far beyond the state legislature of “protecting the health, safety, and welfare of the public.” Certainly, a design must ensure that a movie theater has the right number of emergency exits, for example. But social responsibility extends far beyond compliance with building codes. Just to name a few topics of accountability: carbon footprint reduction, community engagement, equity and equality, industry diversity, ethical labor practices, philanthropy, resilience, and affordability of housing.

Please heed Stan Lee as he proclaimed, “With great power, there must also come great responsibility!”

When I ponder social responsibility, I also confront social irresponsibility. As I prepared my notes for a presentation for Modernism Week 2022, out of a number of unfortunate examples of imprudence, two come to mind: scale and optics.

First, how tall do we need to build? When the Eiffel Tower was completed in 1887, we reached the limits of our engineering and creative ambitions. At 1,083 feet tall, Eiffel was a marvel and over time, has become one of the most beloved structures in the world. Who knew we would need or want to build taller?

In 1930, the Empire State Building shattered records, completed with a height of 1,454 feet. Over the years since, clients, developers, corporations, engineers, and architects continued an obsession to pierce the sky with vertical and priapic structures. Perhaps, ego and arrogance were the fuel.

Currently, the award of conceit goes to the Kingdom Tower in Jeddah, Saudi Arabia. Exceeding $1 billion in construction cost, when completed, this literal skyscraper of hotel rooms, residences, and offices will be 3,281 feet tall—three times the height of the Eiffel Tower and more than twice the height of the Empire State building.

The social responsibility of height is not just a numerical indicator. Height is also a concept of scale, meaning responsibility requires architects to understand a building’s height in relationship to its surroundings—whether to be complementary or intentional divisive. The early photo of New York City above displays a red line suggesting a consistent height the buildings, resulting in a cohesive scale and compatibility of neighbors.

The above image depicts NYC today with a similar red line. Half a dozen projects, about 120 to 150 floors tall, counter the scale of the area. Called “Supertalls,” these skyscrapers south of Central Park—mostly residential units serving the super-affluent—pose the questions: Just because we can build this tall, should we? What is the responsibility towards the scale of the existing urban fabric?

The irresponsibility with optics is evident with the 48-floor office building at 101 California, San Francisco. For the design at the street level—though it is likely that the architect and structural engineer have completed a safe structure, the optics of the sliced bottom with slender columns leaves one to wonder. Is this the responsible and appropriate look for a city known for earthquakes? Does the design idea not remind one of a tree ready to fall?

There are many areas of social responsibility, from low-hanging fruit to visionary ambitions. Architects should not shirk the leverage they hold. With societal precedence having granted architects tremendous influence, let’s not let our creative thinking be impaired by ego and poor decision making.

NOT JUST FOR KIDS: THE ART OF COMIC BOOKS 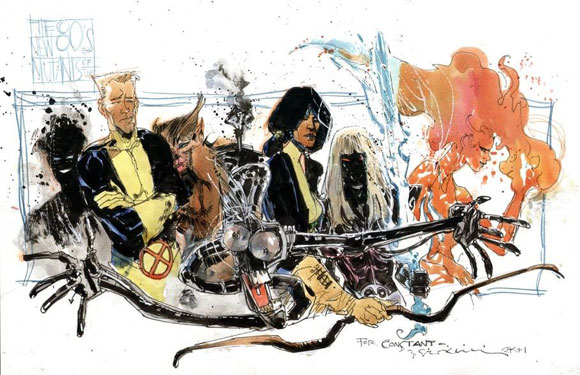 The New Mutants, by Bill Sienkiewicz

No longer targeting an adolescent male audience, comic books have become more complex and far reaching. Some comics, known as “graphic novels,” highlight the quality of the writing—even honored with the Pulitzer Prize. Alongside the award-winning stories, the artwork of comic books have evolved from the crude cartoons of early comic strips found in the back pages of the newspaper. Comic book illustration has advanced to the level of art. As in fine art, as in Michelangelo and Da Vinci.

The classic art form of comics arguably started with the giants of the 50’s and 60’s, Jack Kirby and Steve Ditko. Their line work was crisp and clear. Though graphically modest, the art was expressive. The colors were flat, but boldly captured movement and energy in two dimensions. In part due to the limits of rudimental printing, early comic book artists were forced to be thoughtful and efficient. The results brightly portrayed the optimism of the generation.

From the late 60’s to the 80’s, John Romita added tonality and detail. Influenced by the world of Pop Art, abstract graphics enhanced the drama of a scene. Later, ground breaking artist, John Byrnes, continued the study of graphic design and narrative structure, literally breaking out of the typical paneled grid of comic book pages. Note the revolutionary full page art of Iron Fist, and how the smaller insets exhibit the fist of our hero transforming to iron, alongside the oddly shaped boxes of commentary. As with the Pop Art movement, irony and criticism entered the pictorial lexicon, representing a growing interest for originality and a fresh look at old things.

In studying the development of Batman over the generations, the simplicity and naivety of pioneer Dick Sprang’s Batman from the 40’s evolved to the heavy use of black ink from Neal Adams three decades later. In Frank Miller’s seminal 1986 release of The Dark Knight Returns, we confront the twisted representation of our gritty anti-hero, whose shadowy presence is barely contained within the limits of the physical page. From innocence to dark forces, graphic tools displayed our weariness in celebrating so-called virtuous heroes.

Testing further visual limits, Miller takes an abstract pictorial approach, reducing Superman and Batman to merely cinematic silhouettes. Yet through this graphic austerity, the carefully composed and detailed postures imply the entire story. Perhaps our brains are so filled these days with data, emotions and retorts, that a mere gesture can cause our bodies to generate complex reactions.

My all-time favorite, Bill Sienkiewicz, transforms the visuals of comics to the highest level—as a classical painter would, as a mixed-media artist would. For the past three decades, Sienkiewicz captured emotional and psychological content in the most imaginative of techniques. In this Moon Knight cover, note how the villainess in red, intentionally omitting her body’s outline, becomes the entire background of evil, or the cover drawing that is 98% minimalist black.

Going further, The New Mutants cover illustrates Sienkiewicz’s interest in mixed-media collage, expressing even the tape that attaches the scraps of paper. Doing away with the slickness of illustration now offered by digital means, he reverses his approach to show an honest and revealing snapshot of process and composition.

Finally, Sienkiewicz’s beloved assassin, Elektra, is treated with the skill, vision and artistry on par with any generation’s most prominent creative geniuses. With some illustrators, we have reached the bleakest and most dense part of our souls. Sienkiewicz and other innovative artists reached deep into murky places and offered beauty, instead of despair.

Is it so simple to say there is a linear path from the innocence and optimism of early generations to the difficulties and sarcasm of later generations, from oppressing nightfall to triumphant invention? If comic book art and the methods of artistic process and reproduction represent the development of the human condition, than I utter the legendary phrase by the father of comic books, Stan Lee, “Nuff Said!”

“WITH GREAT POWER THERE MUST ALSO COME GREAT RESPONSIBILITY!”

Are architects celebrities? Are they rock stars? Do “Starchitects” exist amongst mere mortals?

Years back at UCLA, I attended a lecture by Pritzker Prize, Dutch architect Rem Koolhaas (my Harvard professor). Endless crowds lined up all day in advance for the evening performance. Upon opening the doors, the large auditorium was full in seconds. The organizers opened up two additional auditoriums with the lecture to be broadcast on screens. All this, and masses of people still could not fit in the venues. Front row: Brad Pitt, Martha Stewart, Dianne Keaton, Michael York, Vidal Sassoon, and other design fans and fanatics.

I am not proposing that an architect could fill a stadium like Taylor Swift, a concert hall like Lang Lang, an arena like Jordan, or a theater like Baryshnikov. Rather, I am impressed with and a little weary of the influence that some architects possess by simply standing at a podium with a PowerPoint of their latest projects, anecdotes and social theories.

With his world travels and outrageous behavior, perhaps Frank Lloyd Wright was the first Starchitect. But Ancient Greece had Mnesikles. The Renaissance had Michelangelo. The British Crown had Wren. Modernism had Le Corbusier. And he, alongside Wright, Eero Saarinen and Mies van der Rohe graced the covers of Time magazine.

Sure, the spotlight is flattering. The ego is stroked, as an architect’s head inflates larger and larger.

But all this said, being an architect comes with responsibilities. Some responsibilities are obvious and some, not so obvious: provide buildings for shelter, provide a roof that won’t collapse on your head, provide beautiful structures that will stir and inspire, provide creative designs that will support the evolution of cities, and provide tremendous visions that will challenge a nation’s cultural complacency. Architects have a voice. By mere role playing, we are provided a soap box to stand on, wave our hands, wail profound statements—and hope to affect education, social policies, and the spirit of our time. Our zeitgeist.

In several venues, we have influence. As comic book writer Stan Lee declared in 1962, “With great power, there must also come great responsibility!”

This responsibility may be, at one end of the spectrum, designing homes for the homeless or hospitals in third world countries. At another end of the spectrum, the responsibility can be in designing with awareness for children, the handicap or the aging. Or working with non-profit organizations. Or being a steward for the environment. Or rebuilding a city after a natural disaster.

In 1968, civil rights leader Whitney Young directly insulted and challenged architects at a national convention in Portland, Oregon with this, “You are not a profession that has distinguished itself by your social and civic contributions to the cause of civil rights . . . You are most distinguished by your thunderous silence and your complete irrelevance.” Fire in the belly of architects, a battle was waged.