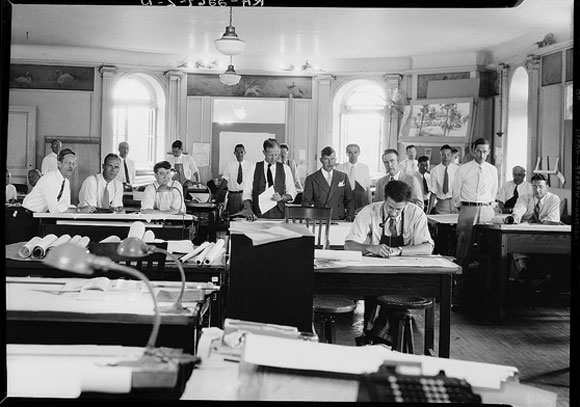 Why are there so many architects in the movies and on TV?

In most cases, the fact that an actor is an architect on the small or big screen is superfluous to the actual plot. Though a popular trope, the role of the architect is no more than a characteristic, a trait assigned to the male lead, and in fewer cases the female lead, only to provide substance and gravitas.

This matter—the truth and accuracy of how architects are portrayed by Hollywood—is frequent coffee room or cocktail hour chatter among practicing architects. We are at turns offended or flattered, but always perplexed.

Here are the basic elements of the architect-in-entertainment mix-and-match dramatis personae toolkit:

The writer and director of Sleepless in Seattle needed Tom Hanks to be the reserved, artistic businessman at the center of the story, so they made him an architect, not a poet, cop, or hedge fund manager. They also didn’t want Hanks actually being an architect most of the time. Those paying to watch a romantic comedy with Meg Ryan want to see Hanks as the sensitive, romantic architectural designer with an ideal nature, not Tom Hanks as a real architect trying to restart his laptop because the Revit software has crashed again, and then spending the rest of his day slaving for a client who can’t decide whether the exterior paint should be tan, sand, or beige, or whether the bathroom tile should be ivory, buff, egg shell, or ecru. Also, Hanks can’t spend his time hitting the pavement hoping to find another commission so he can pay his office rent.

Poets, cops, and denizens of Wall Street are equally charged character fodder, but for different purposes. The architect character is altruistic, worldly, cool, but not too cool, well dressed, and established. Architects are also considered not wild, emotional, or too, too sexy. (I would sometimes like to be, or at least thought of as being, one or two of those things.)

In a drama, the architect is the cool center, and often needs the supplement of other traits from the screenwriters’ playbook, such as diplomatic jury member or struggling educator, to beef up the character’s potentially monochromatic dimension. In comedy, the architect’s impartiality allows other cast members to shine uncontested with wit and satire. Architects are safe non-distractions.

Except for the Gary Cooper role, which came with the heavy expectation associated with Ayn Rand’s bestselling and controversial novel, The Fountainhead, I suspect most do not recall that the actors above portrayed architects. That’s how well the role was written and the stereotype applied. And as to the stereotype syncing with the real world, the roles are mostly male, reflecting an issue in the real architectural world, though that is changing for the better.

Serious movie fans will note some omissions on my list. I did not list the following, for the reasons stated:

Paul Newman in Towering Inferno: He’s really playing an architect in a real design and construction crisis, not playing a stereotype.

“The Architect” in the The Matrix movies: He’s not a builder of buildings per se, but a builder of an entire future world, which I certainly envy, but not quite to that extent, my ego aside.

Charles Bronson in the Death Wish movies: As he is a vigilante murderer, I invoke the “exception proves the rule” cliché. Architects can be cool, but not cool killers.

For my full feature essay, go to the Film and Music Issue of the recent LA Home.