Upon a visit to Seattle, I confronted three different buildings—all leaving a seductive imprint on the city and my memory.

The first two projects are by two of the most famous living architects on the planet. The third is by an anonymous company, one without the trappings of a sole Wright-ian genius which gives way to collaboration instead—for better or worse.

(Three disclaimers: Rem Koolhaas was my professor in grad school; I was employed by NBBJ in the 90s; and I did not have an opportunity to visit the interiors of The Spheres.)

The Seattle Central Library, designed by the Rem Koolhaas and shepherded by local Architect-of-Record, LMN, opened to the public in 2004—the winner of a lengthy design competition. The reviews of this 11-level, 363,000-square-foot building varied.

The international architectural scene claimed the design a heroic success. Others saw a design with a target on its back—and its front too. The Seattle Post-Intelligencer spewed adjectives: “decidedly unpleasant,” “relentlessly monotonous,” and “profoundly dreary.”

I side with the glorious praise hailed from the enlightened world. The library design comprises community spaces that engage the public on many levels, (literally) as well as a civic icon unlike anything seen before.

As Professor Koolhaas taught us in school: Do not design simply in floor plan, meaning, not just one-dimensionally laying out an auditorium next to offices next to restrooms. Instead, design in section, meaning, three dimensionally as one places a library over a five-story high living room, then tucking parking under the auditorium.

The library’s innovative and challenging (yes!) urban form, the diamond-patterned skin of glass and steel, a four-level spiral of books, a complex layering of space and experience, and so on—all this together convinces me that I have walked into one of the most exciting works of contemporary architecture.

THE MUSEUM OF POP CULTURE

The Museum of Pop Culture, coined “MoPOP,” opened in 2000 under the former name, the Experience Music Project—coincidentally also included the participation of the same Architect-of-Record, LMN. Frank Gehry’s design, though predictable and yet another variation-on-a-theme (nearly a career-long theme) offers passerby’s a composition of great risk and resulting beauty.

According to the client, “When Frank O. Gehry began designing the museum, he was inspired to create a structure that evoked the rock ‘n’ roll experience. He purchased several electric guitars, sliced them into pieces, and used them as building blocks for an early model design.”

Such tales subscribe to the mad artist genius syndrome. True or not, it makes Gehry sound like less of a thoughtful architect creating wonderful spaces for the public, and more like an awkward child who believes that the broken pieces of a guitar can represent a work of architecture.

Five giant building masses sit at the base of the Space Needle, each mass clad in enigmatic surfaces, like fire-engine-red stainless steel or fuchsia-fluorocarbon-coated aluminum—comprising a total of 21,000 individually cut metal shingles. As an object, as architectural sculpture, the composition is stunning. Does not disappoint. Having the monorail pass through the building is yet another daring move that delivers a thrilling creation.

But the 140,000 square feet of interior space underwhelms, fails to translate the exterior exhilaration to the indoors. Whereas the Seattle Central library sings with its visionary interior design, MoPOP falls out of tune. Aside from a few flourishes, like a dynamic staircase or a contorted lobby space, most of the museum’s inside is not much more than generic exhibit space. One might argue that a museum’s interiors should be flexible and so inherently boring, but I would then direct your attention to the Guggenheim Museum in Bilbao, also by Gehry.

You don’t need the singular vision of great artistic minds like Koolhaas and Gehry to deliver good architecture. Unlike the first two projects, NBBJ played the role of Design Architect and local Architect-of-Record, meaning both the creative lead as well as the development and production team.

Aptly named The Spheres, Amazon’s new workplace and quasi-visitor center is made of three giant glass and steel spheres, colliding like a kid’s exhaled soapy water bubbles. Recently completed in 2018, Amazon claims, “The Spheres are a place where employees can think and work differently surrounded by plants.”

Is it just another glamorized office? Just more “creative office space” glorified by real estate agents? But the phrase “surrounded by plants” fascinates me.

The spherical structures, conservatories actually, house 40,000 plants from over 30 countries. Within a meticulously engineered structure of 2,600 pentagonal hexecontahedron panes of glass alongside 620 tons of steel, I see one of the finest examples of biophilia. For reference, a past article, “Biophilic Design refers to our instinctive association to nature and the resulting architecture that enhances our well-being.”

Aside from the obvious design reference to Buckminster Fuller’s utopian geodesic domes of the 60s, the Amazon Spheres offer a new narrative for office space, retail, café, and meeting places. NBBJ has shed the dogmatic aim of developers to maximize floor area. Similar to Koolhaas, NBBJ celebrates the magnificence of volume, as in cubic footage (or in this case, spherical footage) and the capture of air, light, and a more productive work culture.

The total result is impressive, likely to be a local fan favorite and on every city tour guide. The design is good, even great, but is it inspired? Will it change the world? Probably not.

Frank Gehry, on the other hand, seems to be playing the same note over and over again. But is that wrong, especially if this one note is sheer genius played with virtuosity? 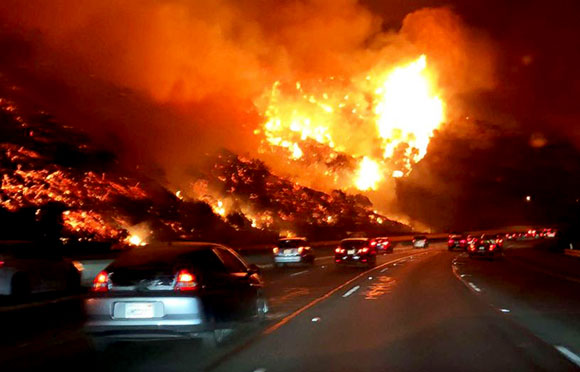 Fires at the 405 freeway, near where I previously resided. (photo from abcnews.go.com)

As earthquakes and fires challenge our complacency, as a decade concludes, the design industry confronts transitions and shifting grounds. No, not trends in popular paint colors. And not faux-Cape-Cod homes on the west side. Architecture is one of the few remaining noble fields where those who choose to participate do so because architecture has the capacity to change the world.

Sustainability is not a fad, no longer just a movement. It is mission critical. Being green does not simply comprise solar panels on the roof with recycled materials in the kitchen. Being an advocate for the environment has evolved into a lifelong commitment to our global community.

Last year as Poon Design Inc. received its certification as a sustainable business from the California Green Business Network, our pledge went beyond saving on paper and electricity. Our calling involves educating clients, participating in community service, and thinking beyond the physical environment, to include our economic and social circumstances.

Add the recent interests in biophilia and the instinctive association to nature and all forms of life. More crucial is what is known today as resilient design. How does architecture recover from disaster, whether fire or flood—even terrorism or a school shooting?

I embrace the old school tools of my trade that include a pencil, triangle and drafting table. A quantum leap for design arrived with digital technology. Computers and algorithms are not just powerful tools for the creative process, but also for construction. But I argue that our clients have been saturated with this promising call of a technological future.

For the design process, hands-on, rolling-up-one’s-sleeves, real-time methods replace clicks of the mouse. Expressive hand drawings far outshine the heavily-Photoshopped computer rendering. A 3D-rendering captures what the house might look like. But a hand-drawn sketch captures the emotion. When in construction, Poon Design challenges the machine-made and the factory-produced output. We embrace the hand-crafted that expresses the human touch.

Where advantageous, architects became design-builders. Where necessary, lines between architects and interiors designers became fuzzy. Where strategic, architects designed furniture and interior designers designed bedding and kitchenware. Though the business model of single-minded specialization is an expedient method to market one’s brand, such as being the expert of Spanish Colonial estates in Beverly Hills, the current industry reveres the design companies of greater depth and complexity. As Frank Lloyd Wright promoted decades ago, ambitious design studios offer an array of services under one roof, from architecture to interiors, from furniture to graphics, from landscape to product design. With the right client, Poon Design adds branding, fashion, art/music curation, and certified feng shui services.

For each designer focusing exclusively on luxury single-family residences, there are architects embracing tract homes, prefabricated ADUs, affordable housing, and co-living mixed-use projects. Why can’t the architect of homes design a Buddhist temple?

Practically a cliché these days, Heraclitus proclaimed, “The only constant in life is change.” The truism still applies.

I don’t have a crystal ball, nor do my fellow classmates. But we are somewhat Futurists and we encounter the patterns. 1) The significance of community outweighs the consequence of self. 2) Face-to-face, hands-on interaction prevails over phone texts and posting on Instagram. 3) There are no limits to what a designer can design, what a creative mind can create.

OUR DESIRE FOR NATURE 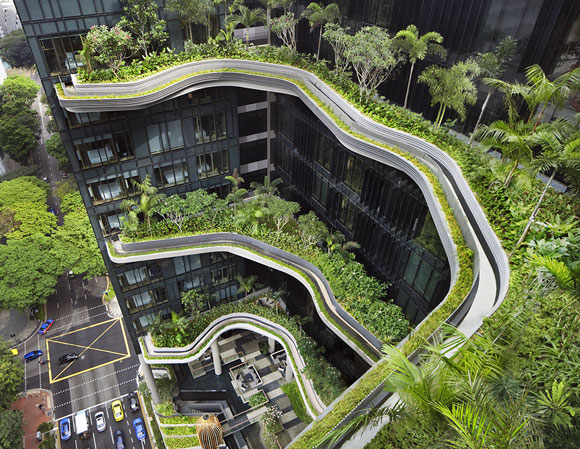 Biophilic Design refers to our instinctive association to nature and the resulting architecture that enhances our well-being. It has been suggested that Biophilic Design offers a healthy and productive existence, as well as happiness and joy.

Goals for this prevalent design movement include the generous use of landscape inside and out, abundance of natural and artificial light, organic materials and textures, good indoor air quality and ventilation, and thermal and acoustic comfort—just to name a few. And our biophilia, meaning our love of nature, extends beyond architecture.

Monster companies, such as Amazon, Facebook and Google, use Biophilic Design to offer a healthier, happier and more productive work environment. This we know; so let’s expand our discussion of design and the creative arts, beyond the built environment.

From photography to vintage botanical prints, from classical painters to amateurs—capturing nature in two dimensions have driven artists for centuries.

Similarly, sculptors are drawn to the forces and mysteries of our natural environment. Here, installation artist/sculptor, Patrick Dougherty, combines his love of natural materials with his background as a carpenter.

Looking to the surrounding landscape for ideas, the world of fashion and glamour draws upon themes, patterns and colors in our natural world.

A popular icon of body art, flora/fauna is prevalent in the tattoo culture.

Similar to tattoos, the two-dimensional imagery of nature and its associated visual power provide graphic designers an infinite palette.

In baking a cake, rarely are these flowers real. They are usually just cream, butter and sugar. The origin of this longstanding decorating theme is unknown. Why does a wedding or birthday cake need to have flowers all over it? Why not birds and butterflies?

With his Sixth Symphony, known as the Pastoral Symphony, Beethoven choose to compose in a countryside setting, allowing the comforts of nature, its vibes and currents, to move him to write classical music. Other composers, such as Vivaldi, captured the abstract character of each season through melody, harmony and rhythm.

Whether a painting or a wedding cake, whether a building or a tattoo, Biophilia and biophilic design occupies our every day. In his 1984 book, Biophilia, Harvard professor, E.O. Wilson, introduced the concept, that we all have “the urge to affiliate with other forms of life.” Then he gave it a name, associated it with architecture and design, and we now have the moniker to label our innate love for nature: Biophilia.

Final note. Not everyone chooses biophilic design. In my article, White on White on White , we see that some do not seek a comfy house made of rustic wood and covered in vines. Rather, some individuals desire the modernity of a steel and glass, white house—ordered, abstract, simple, removed from the common traits found in our evolving nature and its living organisms.